Spike Jonze Just Directed the Most Insane Perfume Commercial Ever 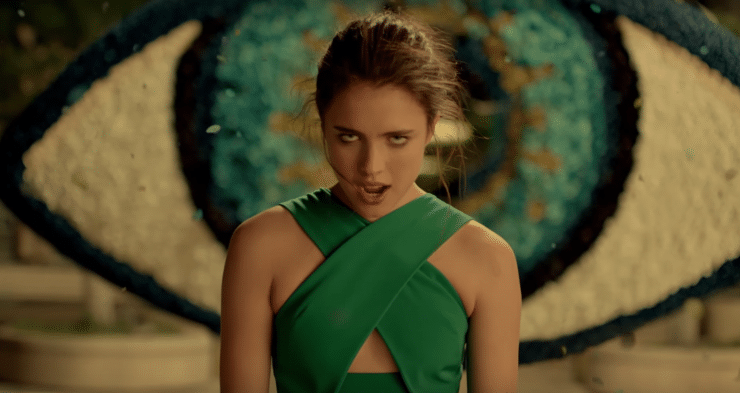 Spike Jonze Just Directed the Most Insane Perfume Commercial Ever

Spike Jonze's new commercial for Kenzo perfume is as bold as it gets.

If you give an auteur a commercial, don’t be surprised when he or she goes off the wall. In this case, Spike Jonze has done that quite literally. His latest commercial, for the Japanese perfume company Kenzo, features hypnotic choreography as a young socialite (Margaret Qualley, The Leftovers) escapes the stale atmosphere of a gala to go berserk in the hallways of the empty building. Ryan Heffington—whose work includes Sia’s “Chandelier”—has created erratic and rapturous choreography, a kind of full-body catharsis from which you can’t avert your eyes, to the tune of “Mutant Brain” by Sam Spiegel (Jonze’s brother) and Ape Drums .
“I love watching the combination of excitement, violence, and insanity,” Amanda Hameline, a Brooklyn-based choreographer, told No Film School. “It makes for a female passion so strong it’s dangerous, which seems to be the idea all other perfume ads try to sell.”
Replete with laser beams and statue-licking, the riveting commercial demonstrates Jonze’s low-contrast color palette (here, nearly venturing into sepia tones) and affinity for the vagaries of human movement through space.

As the line between content and advertising continues to blur, commercials have become increasingly cinematic. Many famous directors, such as Ridley Scott, David Fincher, and Michel Gondry, have supplemented their income with intermittent forays into commercial directing, which affords them a unique arena in which to showcase their signature style (or, in this case, personal brand). David Lynch has also directed his fair share of unorthodox commercials—not the least of them a thoroughly Lynchian Playstation commercial which he gave the Eraserhead treatment, complete with black-and-white cinematography, floating heads, and, of course, smoke and fire.

Commercial directing has long been a pipeline to feature directing; many agencies view the commercial industry as a launchpad for the most promising auteurs they represent. But when we spoke to veteran commercial producer and filmmaker Jen McGowan earlier this year, she cautioned against this ideology, which she claims can be misleading. “Commercial directing is an industry,” McGowan said. “It is a career in and of itself. Don’t direct commercials because you want to be directing features. If you want to direct features, direct features.”